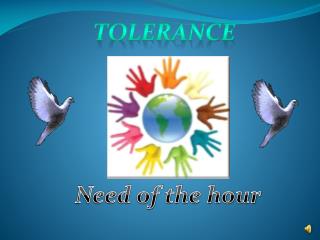 Tolerance. Need of the hour. What is tolerance ?. The capacity for or the practice of recognizing and respecting the beliefs or practices of others. Why tolerance is the need of the hour ?. Dentist Marketing: Need of the Hour - The uk has many companies that are willing to help you in dentist marketing. you

Branding is the Need of Hour - The ways, trends and techniques of branding keep on changing from time to time. there has

Home Tuition - Need of the hour - Parents may do their best to monitoring their children and provide homework help.

CONSUMER EDUCATION NEED OF THE HOUR - . did you know???. a man found a foreign particle in a bottle of a soft drink. he

The Need Of The Hour: Fertility Insurance - Do you believe that insurance should include infertility? share your stories

Digital Signatures the need of the hour - Digital signatures are the most secure and fastest mode of transaction. now

Language Translator: The Need of the Hour - This blog talks about the importance of having a language translator for your

Self-Storage – The Need Of The Hour - Self-storage can be required for a large number of applications. previously, it

Need Of The Hour Security Camera Systems - Nowadays, security camera systems are a necessity and their demand has

Environment-Friendly Living: Need of The Hour - This summer was one of the most troubling seasons across the nation,

Delhi Housing Society: Need of the Hour - Delhi housing society is now one of the most affordable housing project in

CAR WASH - THE NEED OF AN HOUR - Maintaining a car regularly is very important. while some people prefer to wash their

Event App - The Need of an Hour - An event app is an essential event-tech tool with multiple benefits. here are few tips