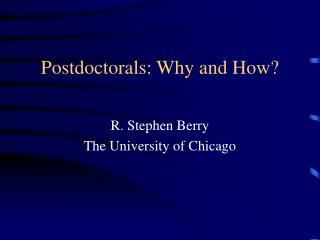 Postdoctorals: Why and How?. R. Stephen Berry The University of Chicago. The “natural niche”. Some postdoctoral positions available prior to mid-1960’s, many of them prized fellowships conferring independence on holder. Some for learning a new field. Laboratory of Fish Endocrinology and Environmental Physiology - . hawaii institute of marine biology school of ocean and