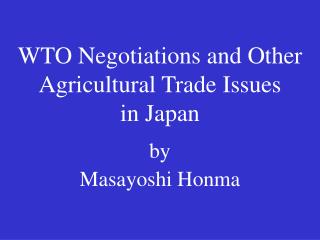 WTO Negotiations and Other Agricultural Trade Issues in Japan by Masayoshi Honma. New Development of Agricultural Policy since UR. Tariffication of rice in 1999 Basic Law on Food, Agriculture, and Rural Area in 1999 New WTO negotiations on agriculture since 2000

National Board of Trade Lena Johansson Director General - . national board of trade. agency for foreign trade and trade

National Board of Trade Lena Johansson Director-General 2013-10-14 - . national board of trade. agency for foreign trade

Automated negotiations: Agents interacting with other automated agents and with humans - . sarit kraus department of

The purpose of America’s Open Door Policy was to - 1. in 1900 the united states declared an open door policy that

FEUDAL JAPAN - . essential question : what were the characteristics and causes of japanese feudalism?. part i: early

An Overview of the Thai Agricultural Futures Market - . by the office of the agricultural futures trading commission