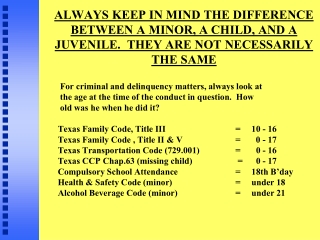 ALWAYS KEEP IN MIND THE DIFFERENCE BETWEEN A MINOR, A CHILD, AND A JUVENILE. THEY ARE NOT NECESSARILY THE SAME For criminal and delinquency matters, always look at the age at the time of the conduct in question. How old was he when he did it? Adjudication hearing - . more than a million cases of alleged delinquency brought before the juvenile court each year

Let’s Go to Court! - . on jurisdiction and judges. the federal system. not just one constitutional organizational