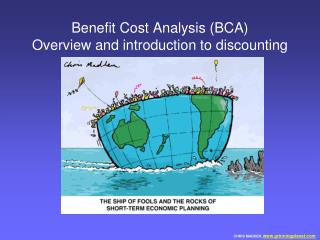 Benefit Cost Analysis (BCA) Overview and introduction to discounting. CHRIS MADDEN , www.grinningplanet.com. Policy tradeoffs: environmental quality vs. the costs of regulation. “….we’re getting rid of the ones that kill jobs.”. The advent of BCA. Benefit-Cost Analysis: Measuring Benefits - . the focus of bca is the total economic value (tev) of the change in social

Cost / Benefit Analysis - . cost/benefit analysis. developing an it application is an investment. since after developing

Cost Benefit Analysis - . as economists, we are usually called in when the project is already designed. c-b analysis

Cost-Benefit Analysis 2 - . how much pollution is too much?. case study: lead in drinking water. standards required