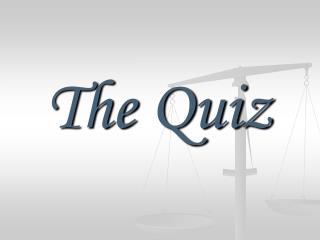 The Quiz . Montana Quinn, the chief of police of the city of Rockne, Ohio has announced her resignation from the force. .

AHSGE Quick Facts - . study for fast fact quiz!!!. get out a clean sheet of paper for the quiz get out your revivalists

ENT Quiz - . q 1. what technological advancement in the 1950s made it possible for wullstein to describe the different

A Short Math Quiz - . this short quiz has been written to model the use of action buttons in powerpoint. when you are