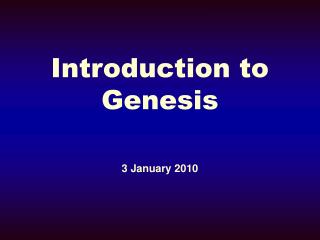 Introduction to Genesis. 3 January 2010. What is Genesis?. Meanings: “birth” “creation” “cause” “beginning” “source” “origin”. Who wrote Genesis?. Moses wrote the first five books of the Bible These have different names: The Torah The Five Books of Moses The Pentateuch Introduction to the Book of Genesis - . the bible course, unit 3. document #: tx001074. overview of genesis. genesis is

1. An Introduction to the Pentateuch: Genesis - Hebrew canon. hrwt~yaybn~ybwtkw. content of the pentateuch. 1. "the

Genesis - . bernard beckett. select a topic to revise . theme question: what does it mean to be human? character: adam

GENESIS - . the 1 st book in the bible written by …moses. genesis. begins it all …….. and appropriately it is at

Genesis - . jacob’s trouble. the religious mentality: what is god trying to do? i don’t know, i just want my bills