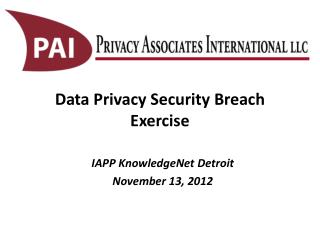 Data Privacy Security Breach Exercise. IAPP KnowledgeNet Detroit November 13, 2012. Purpose. Provide a forum to discuss privacy security data breach issues Discuss how best to respond in the event of a privacy incident and learn from the experience of others in a safe, no risk environment Examination of a Privacy Breach - . what to do when a privacy breach occurs misa london region professional network