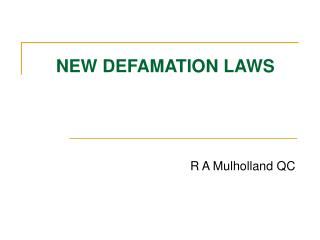 NEW DEFAMATION LAWS. R A Mulholland QC. Old Act Cause of action = “defamatory matter” or “the matter of the imputation”. Each imputation constituted a separate cause of action. New Act Jurisprudence 101 - . jurisprudence. embraces all the laws enacted by the legislative body of the state, all rules and

Forces and Newton’s Laws of Motion - . force … a push or a pull. force is not a thing in itself, but rather an

Still introduction - . as we have seen, drug regulatory affairs are governed either by laws or decisions of competent

DEFAMATION - . unlike most of tort law, defamation has little to do with protecting individual or communal security. nor

Three Laws of Motion - . an overview of newton’s three laws of motion. click to continue. how it works. menu: buttons