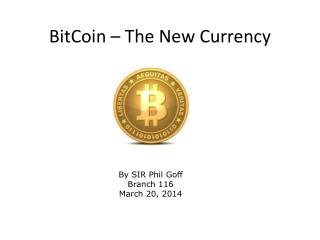 BitCoin – The New Currency. By SIR Phil Goff Branch 116 March 20, 2014. Bitcoin – The New CryptoCurrency. How did it get started? How is the currency created? Why does it have value? Who controls the value? Who Accepts Bitcoin? How Would I buy some Bitcoins? The Single European Currency - . tutor2u ™. key issues. which countries have joined the euro zone? why have convergence

Bitcoin : A New Internet Currency - . the opinions expressed are solely those of the presenters and do not reflect the

Glocal Social Engagement is the new currency of the future - . no silos in any sector as each person will be his/her own

CURRENCY - . what is currency?. currency is the money the government and the people use within a given country every

Currency - . by john shi pd. 6. what is currency?. a system of money in common use banknotes plus coins physical tokens

Is Bitcoin really a currency? - . david yermack nyu stern school of business november 22, 2013. what is bitcoin?. a

Bitcoin The Future of Currency - . “there is no way to value bitcoin, which means there is nothing constraining its

&quot;SHARE&quot;,  The New Currency @isaac - . do we share?. yes, of course it's our daily life embedded in our