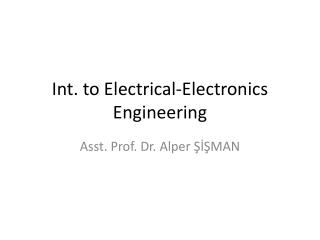 EENG491 Electrical and Electronics Engineering Seminars - . week 1 introduction to the seminar course . how to

DEPARTMENT OF ELECTRICAL AND ELECTRONICS ENGINEERING - . students . faculties. facilities . our strength – faculties of

Electrical/Electronics - . magnetism &amp; electromagnetism. volume 2 of 5 grade 11. what is magnetism?. magnetism is

Electrical and Electronics Engineering Assignment Help- TutorsIndia.com - This article is a guide for electrical

Electrical Circuits / Electronics - . electricity is one of the most important forms of energy available to man. it