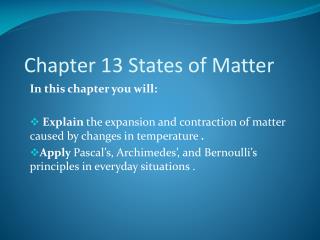 Chapter 13 States of Matter. In this chapter you will: Explain the expansion and contraction of matter caused by changes in temperature . Apply Pascal’s, Archimedes’, and Bernoulli’s principles in everyday situations. Chapter 13 Sections. Section 13.1: Properties of Fluids

Chapter 11 - . solutions and their colligative properties. solution  a homogeneous mixture of two or more substances

Lesson Starter - Section 1 the kinetic-molecular theory of matter. chapter 10. lesson starter. why did you not smell the