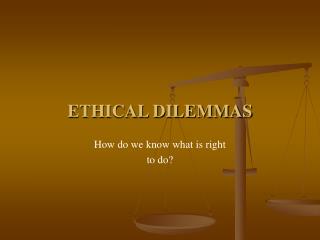 ETHICAL DILEMMAS. How do we know what is right to do?. Introduction. You can save the life of only one of the following. Which one would you choose? A child or an adult A stranger or your dog Hitler or lassie Your spouse or a Nobel Laureate A dog or a weasel ETHICAL DILEMMAS (Making Ethical Decisions) - . the formalist. the definition: the criteria to be used in making

ETHICAL DILEMMAS IN RESEARCH - . social scientists face ethical dilemmas in all areas, they must decide whether gathering

Common Ethical Dilemmas In Physiotherapy - . group 05. p resented by lamha and yasodha. medical ethics. is a system of