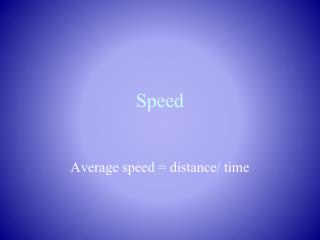 Speed. Average speed = distance/ time. Cheetah. Fastest Land Animal in the world. One was measured at 63 mi/hr . It is probable that speeds up to 70 mi/hr are possible. Cannot run at this speed for more than 1/4 mile. Pronghorn Antelope. Design of PCB and MCM for high speed digital systems - . the art of compromise. torstein gleditsch sintef electronics and

The Next Generation Internet: Unsafe at any Speed? - . ken birman dept. of computer science cornell university.

Science 20 - . unit b: changes in motion. 1.1a) average speed. average speed is the total distance traveled divided by

SHUTTER SPEED &amp; F-STOPS - . when you take a photo, the camera must let in just the correct amount of light to

GOVERNOR - 12. governor. 1. function. to maintain the engine speed at the desire value by controlling the fuel injection.

12.2 Velocity and Speed - . california state standards review. speed. to determine the speed of an object, you need to