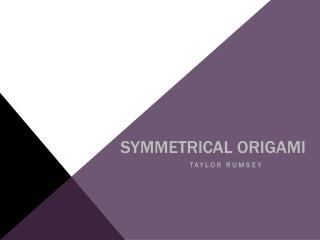 Symmetrical Origami. Taylor Rumsey. Essential Question . How can we use origami to model different types of symmetry?. Objectives. Symmetrical Archaeology - . does not assume dualities develops a posthuman view instead of an interpretation view in

Origami - . by evan lohento. where did it come

Origami - . when you hear origami what do you think of?. what is origami?. folding of paper to make three-dimensional

Origami - . why origami. electric origami - just as a magician appears to create objects out of “thin air,” students

Origami - . by: michaela stambol. origami is…. the japanese art of folding paper into shapes representing objects

ORIGAMI - . -traditional japanese handcraft -. what’s this?. this is a crane. these are all made of…. origami!!.

Origami - . origami ( 折り紙 ) is the traditional japanese art of paper folding. the goal of this art is to create a