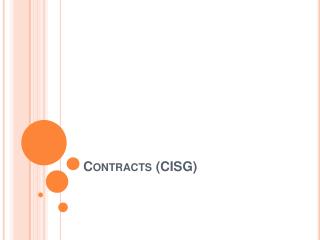 Contracts (CISG). Contracts 2 (from PECL and CISG). INTERPRETATION. INTERPRETATION. (1) A contract is to be interpreted according to the common intention of the parties even if this differs from the literal meaning of the words.

General Overview of the CISG - . monday, october 4, 2010. brief history. the cisg was developed by uncitral and signed in

A. CISG - . united nations convention on contracts for the international sale of goods in effect since january 1, 1988

The sale of goods - . general on sales law in the eu. the cisg european member states and reservations coverage: business

Lecture 10 - . sales topics covered : introduction to the un convention on contracts for the international sale of goods

Scope of UNCISG - . when is contract governed by the cisg?. international

Luca Castellani UNCITRAL Secretariat - 35 years of the cisg: an overview of the cisg, its formulation and its progress in

The history of CISG - . early attempt at uniform cisg law 1 . the convention relating to a uniform law on the