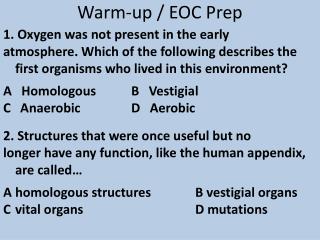 Warm-up / EOC Prep. 1. Oxygen was not present in the early atmosphere. Which of the following describes the first organisms who lived in this environment? A Homologous B Vestigial C Anaerobic D Aerobic 2. Structures that were once useful but no

Warm Up 10/31 - . when an earthquake occurs, energy radiates in all directions from its source, which is called the

Warm up - . use the laws of exponents to simplify the following. answer should be left in exponential form. laws of

Warm-Up / EOC Prep - . 1) the random distribution of homologous chromosomes during the metaphase of meiosis is called

Warm Up - . 8.2b – area between to curves. goal: find the area by using horizontal strips rather than vertical.

WARM UP EXERCSE - . let. find. §3.2 continuity. the student will learn about:. continuity,. continuity properties,. and

Warm-Up - . if the price of the following items were to increase/decrease significantly, would you buy more, less, or the

Warm-up #11 - . in your opinion, were the mongols good rulers? why? why do you think the mongols (yuan dynasty) fell?.

Warm Up - . complete the “k” section of the kwl chart about what you already know about cells. think about what