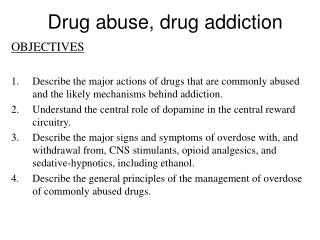 Drug abuse, drug addiction. OBJECTIVES Describe the major actions of drugs that are commonly abused and the likely mechanisms behind addiction. Understand the central role of dopamine in the central reward circuitry. Drug abuse and addiction - . objectives. analyze substance abuse and give 2 symptoms of the disorder compare and contrast

Drug Abuse and Addiction - . by: michelle krieger . what is a

Drug Abuse and Addiction Effects - Learn what drug abuse and addiction can do to your body. visit

Drug Addiction - Drug addiction is a complex and chronic disease that affects your brain and behavior. if left untreated

DRUG ADDICTION - . molecular mechanisms of opiate and cocaine addiction. cocaine – is a psychostimulant drug taken to

Drug Addiction - Rohypnol is used for anastasia, the effect of rohypnol is drowsiness, late reaction, sleepless these are

Drug Addiction - If you need to gain the freedom from drug addiction to save your beautiful life then, call us at

Drug Addiction - A loved one or someone you know, is suffering from a drug or alcohol addiction, this message is for

Drug Addiction - . addiction: what is it?. addiction is ones dependence or need to use certain substances in order to

EFFECTS OF DRUG ABUSE AND ADDICTION - Today, higher than 7 million people undergo from an illegal drug disorder, and one