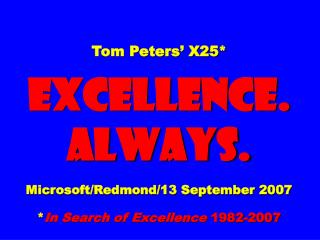 ONTraC presentation Plus random slides after (28 MB) - . note: this presentation contains custom animation and with some

Tom Peters’ EXCELLENCE. ALWAYS. Riyadh/15 November 2008 - . note : to appreciate this presentation [and ensure that it