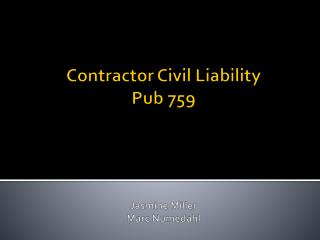 Civil Liability - . aims and processes. what would happen if…. you all won a sunny vacation to cancun. what are torts?.

LIABILITY FOR CONSTRUCTION DEFECTS: LENDER LIABILITY AND LIABILITY OF THE COMPLETING CONTRACTOR

Civil Procedure Professor Marc H. Greenberg - Responding to the complaint. time for responding to service of a complaint