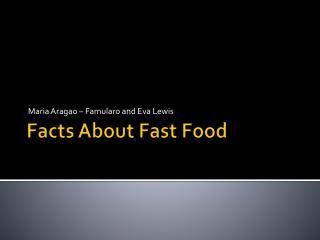 Maria Aragao – Famularo and Eva Lewis . Facts About Fast Food . Fast Food. Fast Food is a term given to food that can be prepared and served fast. Fast Food Each day, 1 in 4 Americans visits a fast food restaurant 10 Disgusting Facts about Fast Food - After reading this you may never want to eat at a fast “food” restaurant again,

Fast FACTS about FCCLA - . family, career and community leaders of america is a national career and technical student

Fast facts about Waklert - Waklert ( https://www.pharmaexpressrx.com/purchase/waklert.asp )contains armodafinil as the

Fast Facts About Track - . by: kayla williams microcomputer applications csci.2433 -02. fast questions. click on one of

Facts About Organic Food - Http://www.naturaljuices.co.uk/ : the term organic is applied to food grown without harsh

Facts about Chinese Food - Hello friends, today i am telling you people about some facts about chinese food that you may

Fun Facts About Food Irradiation - . a presentation of the. why do we preserve food?. protect people from microorganisms,

Fun Facts About Food Irradiation - . why do we preserve food?. protect people from microorganisms, parasites, and other

FAST FACTS - . in the last 1.6 million years there have been 63 alternations between warm and cold climates, and no