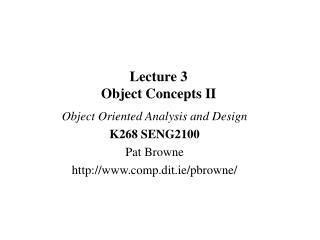 OBJECT-ORIENTED CONCEPTS - . what is an object?. an object is a software entity that mirrors the real world in some way

Object-Oriented Concepts - . a review. terminology. object : a thing that exists in the domain of the problem e.g. an

Object Modeling Concepts:- - Our work at ge r &amp; d led to the development of the object modeling technique(omt),

OBJECT ORIENTED CONCEPTS - . chapter 2. introduction. in the real world, there are many individual objects all of the

Object Oriented Concepts - . movement toward objects. instead of data-oriented or process-oriented analysis, many firms

Object-Oriented Concepts - . what is object-oriented?. this means that we focus on the objects not just the procedures

Object Oriented Concepts - . goals. understand objects, their attributes and their methods. understand the pillars of