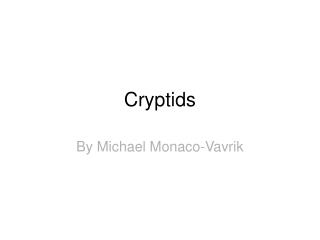 Cryptids. By Michael Monaco-Vavrik. What Are Cryptids?. The word Cryptid means “uncovered” or “hidden” which describes cryptid’s pretty Well. Cryptids are creatures who’s authority are unknown by scientists and general government all over the world like bigfoot and Neisse (loch Ness monster).

sight distnce - What is a computer? 2.what are the applications of computers in the modern era? 3. what are the main

Bats - . by andrew gray, hayden shulenberger, and joseph cugliari. habitat. they live all over the world also live in

The Good The Bad And The Ugly - . final project rex. mood board!. the plan. 3 2d images of each character in an

Cryptozoology - . a guide to “lost” animals of the world. intro to

Bigfoot - . is there such thing as bigfoot or, is the big, hairy creature a hoax???. by : jacob. history of bigfoot.

Hunters and Gatherers - . chapter 2, lesson 1. objective. describe the way of life if the hunter-gatherer trace the

In Search of the Yeti - . by: ben smith, jacob stokes, and will maguire. the yeti or abominable snowman is an ape-like