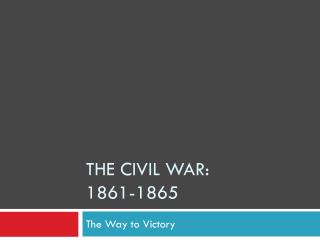 The Civil War: 1861-1865. The Way to Victory. Southern Victories: Fredericksburg & Chancellorsville. No more parades or masses of volunteers Soldiers & civilians faced grim outlook 1862-63 Gloom for North and hope for South Lee and the Rebs looked unbeatable