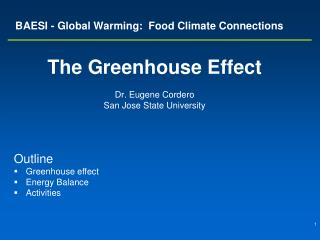 GLOBAL WARMING Our Responsibility Toward Climate Change - Global warming “not only is it real, it's here, and its

Global Warming &amp; Global Climate Change - . how do we know about the temperature changes?. past temperature

BAESI - April 28, 2012 major evolutionary transitions 1: dinosaurs and birds (or, “this chicken tastes like a

Food Connections - . snc 1d r.h. king academy. what is the origin of all animals’ food?. plants! whether herbivore or