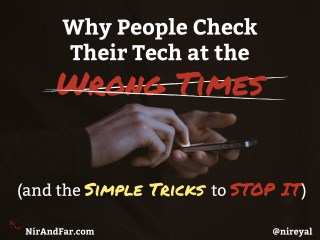 Chances are you've witnessed and even took active part in a lot of indiscriminate gadget use. But staying silent about bad technology habits is making things worse for all of us. We need to develop social antibodies, defenses against new harmful behaviors, or else we'll end up serving technology instead of it serving us. If we don’t build social antibodies, the disease of distraction will become the new normal. To do this, we need to find out who's to blame for our distraction and what we need to do about it. Read the whole blog post at: http://www.nirandfar.com/2016/03/why-people-check-their-phones-at-the-wrong-times.html Why is It Necessary to Check the Background of the People? - Background checks is a valuable tool for selecting the right

Why People Lift Their Houses - The majority of us will never need it, in fact most people probably don't realize it is

Why People Love To Hate Shopify - The trick to a great billing is having an excellent template to begin with. a design

Why You're Failing at 해외스포츠중계 - You can even add the games to your profile at the likes of xanga,

Why do people recycle their computers - Http://www.xtremeworx.com.au/products.php - one must understand that however old

Signs of the times ! - . repeat signs and codas dr. jarmon. where did it all begin ?. in the middle ages, the

TECH FAIR - . jacques. introduction. we are making a simple robot that is small and easy to make. the design is very

Why Some People Fail At Internet Marketing - Getting into internet marketing is like going into business for yourself.

WHY DO PEOPLE SEND FLOWERS TO THEIR LOVED ONES ? - Uf075sending flowers as gifts is a tradition. whether it might be