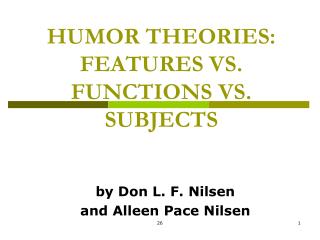 3 rd grade Week 28 - . robust vocabulary . humor. when you have a sense of humor, it means you enjoy telling and hearing

Individual Theories - . theories. much of the discussion in this section of the course centers on “theories.”

Chapter 6: - . deviant behavior and social control. dining hall at alcatraz. what to expect in this chapter. what is

Using Humor in the Classroom - . or…. “everything you wanted to know about being funny in class but were too afraid

HUMOR IN ADVERTISING - . juan-jose calle. what is humor?. one theory states that humor results from incongruity or

Youtube and Humor - .  louis fletcher irwing madrid. fast and effective. as one of the articles read the democrats have

Personality Theories - . chapter 11. features of personality. characteristic: must be seen in many or all people to be of

HUMOR - . health promotion program navy environmental health center. humor. how good is your sense of humor? how often do