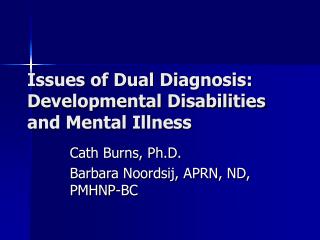 ORAL DIAGNOSIS - . dena 320 deborah bell. diagnosis. to identify or determine the nature and cause of a disease or injury

Co-occurring Substance Use and Mental Disorders in Adolescents: Integrating Approaches for Assessment and Treatment of

Childbirth at Risk - . the perinatal and intrapartal period. describe the mental illness that women are at greatest risk