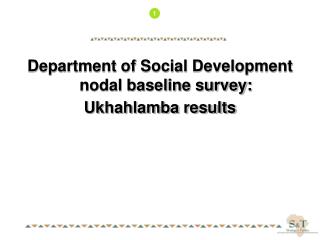 Results Based Accountability Basics A One Day Presentation - . standard training slides sponsored by the ministry of

Seven50 Preliminary Survey Results - . survey results weeks 1-3 . question 1. what are in your opinion, the most

Survey Results 2014 - . servant leadership in action. how important is the early ss gathering and ss song service to your

Results of the National Micronutrient Survey in Malawi - . 18 june 2003. overview of presentation. background and

Benchmarking in European Service of public Transport - . best survey 2008 city report: vienna. about the survey how to