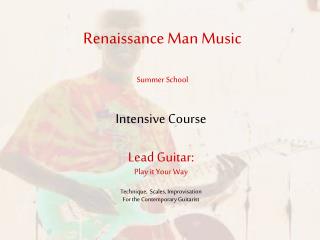 Renaissance Man Music Summer School - . set yourself up to become a guitar hero. introduction. looking back over the last

Renaissance Man - What is a renaissance man? one who exhibits the virtues of an idealized man of the renaissance. oxford

Renaissance Music - . sacred vs. secular. music was divided into two entities: sacred music secular music what is the