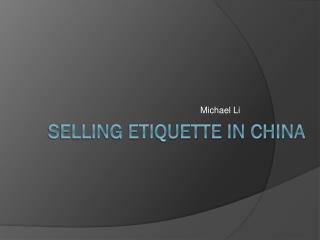 Etiquette in China - . by: jack wilkin and nick m artinez. fun facts about

Business Etiquette in China - Let the confucius institute introduce you to china. business etiquette in china. by wang

Selling Australian Property In China - If you are looking for australian property, then you should prefer fusion yantai

Etiquette in Spain - . riley and keldon. a) floating above the table. b) on the edge of the table. c) one hand on each

Etiquette - . the survival guide. what is etiquette?. forms, manners, and ceremonies established as acceptable in a

Etiquette - . press * 6 to mute; press # 6 to unmute keep your phone on mute unless you are dialoging with the presenter

Etiquette - . dining for success in the professional world and in life. etiquette. purpose of t his workshop: to build

Etiquette - . press * 6 to mute; press # 6 to unmute keep your phone on mute unless you are dialoging with the presenter

Etiquette - What is etiquette? it is an indefinite set of rules of good manner &amp; behavior comes from an old

Etiquette - . items you need to know about managing yourself and the golf course. beginning the match. players shake

Etiquette - . quote. etiquette a convention or unwritten rule in an activity, which is not enforceable but is usually