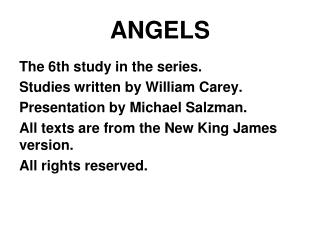 ANGELS. The 6th study in the series. Studies written by William Carey. Presentation by Michael Salzman. All texts are from the New King James version. All rights reserved. ANGELS . Who are Angels? What is their purpose? Where do they come from? . 1-A ANGELS. ANGELS - . i. origin of angels: they are created beings. job 38:4-7 4. where wast thou when i laid the foundations of the

Angels - . game time!. * rules of the game *. give an index card and pencil to each child as they arrive. ask them to

ANGELS - . angels explained by children i only know the names of two angels, hark and harold. -gregory, 5. angels

ANGELS - . are angels male, female, neither? why are they mentioned as male, and depicted as female?. most pictures -

Angels - . what is the need for contact between man and

Angels - The messengers of god. angels. etymology. angel has come from late latin angelus , which in turn has been

Angels!!! - . by:estephanie. angels took care of jesus. everybody has a gardeen angel. there is baby and kid angels.

Angels - . what does the bible actually say about angels?. do angels exist? what are angels? will people become angels in

Angels - . angels. a study of god’s unseen creation by rev. dan domke. angels. do you have any stories?. the

Angels - . ministers for god’s purposes and people. misconceptions about angels. angels look like people with wings

sunshine angels - It is a program about helping