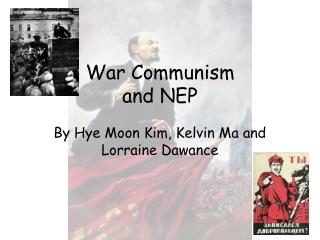 War Communism and NEP. By Hye Moon Kim, Kelvin Ma and Lorraine Dawance. War Communism, what is it?. War Communism can also be referred to as socialism. It was the name given to the economic system that existed in Russia from 1918 to 1924. Lecture III: SOCIAL TURMOIL IN THE 1920S:CIVIL WAR, “WAR COMMUNISM” and NEP - In the framework of the course “

Communism and the Cold War - . early soviet union under communism. lenin comes to power by means of a disciplined

Chinese Civil War and Communism - . origins of the civil war. china had been under european domination for centuries. in

From Civil War to NEP - . causes of the civil war conflicts between classes : could they have been contained through a

CIVIL WAR &amp; COMMUNISM - . china. we will cover. china at the beginning of 20 th century reform movement led by

World Communism and the Cold War - . cold war. ww2 was followed by a period of international tension known as the cold

Red Scare, Communism And the Cold War - . why was the lose of china a blow to the us in its war with communism?

Communism, Cold War and the Nuclear Threat - . part 1: communism and its evolution . origins of communism. communism is

NEP - . why was it introduced ? how different/similar was it to war communism?. “i ask you, comrades, to be clear that

The Cold War Democracy vs. Communism - . how did the cold war affect the american way of life?. what does the term