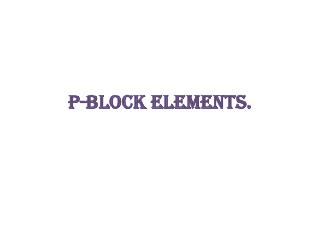 Block-level Elements - . a block-level element always starts on a new line and takes up the full width available

The P Block - . nitrogen and group 5. this ppt from internet, but the content is very relevant though with more detail

a) Derive the electronic configurations of the p-block elements - . (b) the inert pair effect this applies to groups 3,4

Chapter 7: - . the elements. 7.1 properties of the s-block elements. in the universe, there are 92 naturally occurring