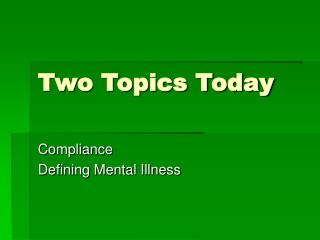 Two Topics Today . Compliance Defining Mental Illness. Compliance.   Authority. Obeying another's command/request Authority Degree to which believe an individual has control over you can change the degree to which you can comply  Obedience. Milgram study (1963). P111 students TWO TOPICS - . 1. information conveyed by speech 2. how speech fits in with the overall structure of language.

Topics for Today - . why college? a model for success benefits of using the center’s resources the importance of

Topics for today - . changes in property after execution of will will substitutes and the execution formalities will

Topics for Today - . what is in my gasoline? burning a gallon of gasoline…. readings for today. 3.6 quantitative