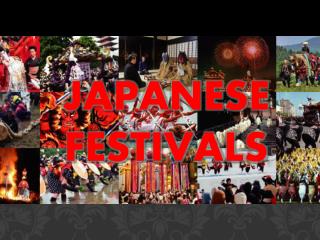 Japanese Festivals - . back to homepage. japanese festivals background. japan has an abundance of local

Japanese Festivals and National Holidays - . spring is the beginning of a year. it’s so warm and comfortable season

Festivals - . conctinued. what is your favourite holiday of the year? what festivals or celebrations do you enjoy in your

Festivals - . and celebrations. brainstorming. what kinds of traditional chinese festivals do you know?. spring festival.

Festivals - . divali holi navaratri summary. divali. divali is the hindu new year and the festival of lights. the

FeSTIvaLs - . exit. exit  (also known as  state of exit ) is an annual summer music festival in the  petrovaradin

FESTIVALS - . carnival we celebrate carnival in february. we do parades and a funny contest. semana santa (easter).