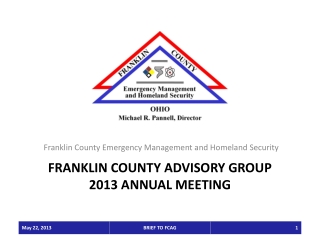 Franklin County - . information to the board of commissioners for discussions on the fy 2011-2012 proposed budget.

Manufacturing Advisory Group Meeting - . why establish a safety council for the food processing industry?. the food

2013 Annual Meeting - . vision: all greater peninsula businesses have access to world class talent. our mission: to