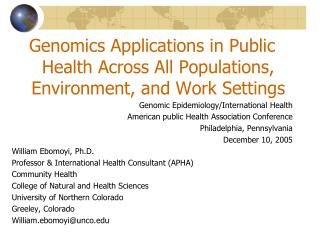 Developments in (all 30-50 or so) STDs: Global Epidemiology and Management - . george schmid, m.d., m.sc. dept of hiv

Epidemiology: Challenges and Answers in the Context of Globalization - . moyses szklo professor of epidemiology and

Disease and Epidemiology - . what is disease? . any condition that jeopardizes the survival of an organism in a

Epidemiology of Emerging Infectious Diseases: An Examination of Global Threats From a Public Health Education Perspecti