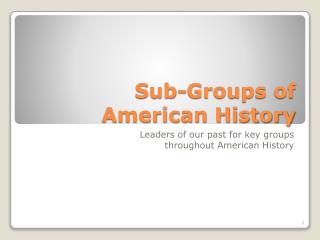 Sub-Groups of American History. Leaders of our past for key groups throughout American History. Puritans valued family, literacy, parental direction. Chesapeake colonies had shorter life span due to disease and had fewer children with fewer families. Jefferson to Jackson - History 201 – early american history. jefferson to jackson. themes in us history in the era.

CHAPTER 28 THE AMERICAN CENTURY - . the american nation: a history of the united states, 13th edition carnes/garraty.

AMERICAN HISTORY - . a new nation review!. “ i won because i learned!”. here is some extra fun for when you finish!

American History One Unit Four - . antebellum america. how did the forces of nationalism, sectionalism and expansionism