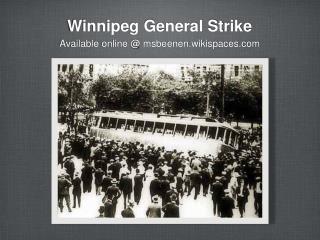 Winnipeg General Strike. Available online @ msbeenen.wikispaces.com. W.W.W.W. Who? ALMOST ALL WORKERS What? A general strike across Winnipeg and other parts of Canada> leads to violence When? 1919 (Not the 20’s but still IMPORTANT) Where? Winnipeg Manitoba How We Got Here - . oea’s long fight for quality public education and a fair contract. in 1995-96, oakland teachers

Security I – General principles - . first, we will look at general methods of making a secure connection, which are

Canada After the War - . what we will learn today:. situation in canada after ww1 relationship between situation in