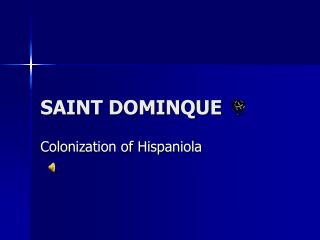 SAINT DOMINQUE. Colonization of Hispaniola. The Natives. The Taíno Indians or Arawak came to the island around 600 C.E. They called the island Hayti meaning ‘mountainous’. Taíno means Good or Noble in their own language. They had a complex government of chiefdoms and sub-chiefdoms. Saint - . by: hazel. the saint. my saints name is st. elizabeth of hungary i chose her because i thought she looked fun

Who is the patron saint of Ireland? Saint Andrew Saint Nickolas Saint Patrick - . according to legend, saint patrick was

Saint-John - What i saw there. after the 80 countries i visited, my favorite holiday places are

Saint Peter - . st. peter is also known as cephas, simon peter, the first pope. peter was born in bethsaida which is

Saint Athanasius - . bishop of alexandria, egypt may2. saint athanasius. the

Saint Venera - . geographical information. saint venera is a small village that is found two miles away from the capital

Saint Petersburg - . st. petersburg is the second largest city in russia and one of the most beautiful cities in the

Saint Esteban - New year’s eve is a great night because a year finishes and another begins. we have 12 grapes when the