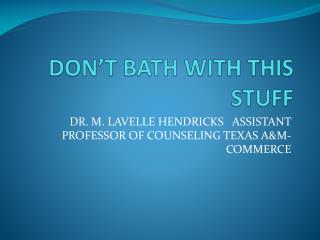 DON’T BATH WITH THIS STUFF DON’T BATH WITH THIS STUFF. DR. M. LAVELLE HENDRICKS ASSISTANT PROFESSOR OF COUNSELING TEXAS A&M-COMMERCE. OBJECTIVES. WHAT ARE BATH SALTS WHERE DID THEY ORIGINATE WHO’S USING THIS PRODUCT SIGNS AND SYMPTOMS OF BATH SALTS USE WHAT’S THE MEDICAL COMMUNITY IS SAYING

DON’T BATH WITH THIS STUFF

How Often Do You Take a Bath? - . 頻率副詞. how often do you….?. you can say… peter always play s basketball

The Technical Services Stuff in IT Services - . a brief tour of the technical and service offering plethora – who

fusion of stuff - . crated by carter voices, sound effects by carter and sandy hasn’t done better than this. note: all

Chapter 12 Star Stuff - . 12.1 star birth. our goals for learning: how do stars form? how massive are newborn stars?. how

Compound Words - . two words joined together to make one word. after. noon. air . plane. air. port. any. body. any. one.