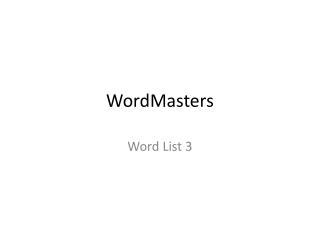 WordMasters. Word List 3. Cache. The squirrel hid his collection of nuts in a small cache in the tree. CACHE. Noun (and verb-to put in cache) a hiding place, especially one in the ground, for ammunition, food, treasures, etc. anything so hidden WordMasters - . by iman. adorn. to give power from a king or a emperor to another person. or to add something decorative

WordMasters Basics: 10 Easy Steps - . wordmasters basics. you have tremendous flexibility in how you build your team and