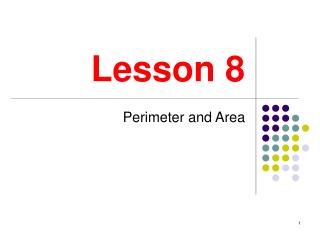 Lesson 8. Perimeter and Area. Perimeter. The perimeter of a closed figure is the distance around the outside of the figure. In the case of a polygon, the perimeter is found by adding the lengths of all of its sides. No special formulas are needed.

Lesson 8 - . what happened to the reptiles. pambupatti is a peaceful village. people of different qualities, different

Lesson 8 - . maldives. who? what? why? where? when?. the maldives. objective : know how coral is formed. understand the

Lesson 8 - . day 1. words with vccv: different medial consonants. discuss the meanings of the words. being able to divide

Lesson 8 - . breaking up &amp; dating abuse. breaking up (write in notebook). what are some common reasons for

Lesson 8 - . how can you provide quality assurance and quality control?. qa/qc in radon measurement. activities to make

Lesson 8 - . separation . roots from lesson 8. super – above. superlative. the highest, above the rest. superfluous .

Lesson 8 - . e-mail. all writing has a beginning, a middle, and an ending. this is true for letters as well as expository