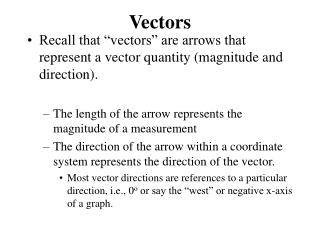 Forces as Vectors - . forces are vectors. this means that they have magnitude (size) and direction. when drawn, vectors

Vectors - . vectors allow you to make resizeable lists of data. with vectors, you can also write functions that will work

Vectors MM1 module 4 - . poul nielsen. vectors module 4 objectives. after this module you should have a clear

Properties of Vectors - . equality of two vectors two vectors are equal if they have the same magnitude and the same

Vectors - . vectors. a vector is a physical measurement that has both magnitude and direction. vectors include

Vectors - . learning objectives scalars versus vectors the components of a vector adding and subtracting vectors unit

Vectors - . units. vectors and scalars difference between a vector and a scalar quantity addition of vectors –

10.1.1 Introduction to Vectors - . today you will use geometry to define and perform operations using vectors. you will

8.6.2 – Orthogonal Vectors - . at the end of yesterday, we addressed the case of using the dot product to determine the