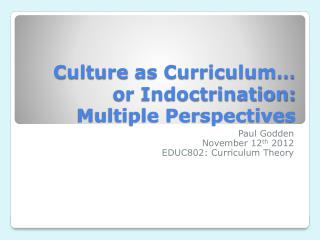 Rigorous Curriculum Design - . greetings and introductions. what is your name, position, and school? why is it important

Community Culture and Curriculum: - . in the context of tribal education in orissa, india. mahendra kumar

Curriculum Mapping - . archdiocese of baltimore presenter – marie strangeway . we need to know where we will begin….

Multiple pregnancies - . definition pregnancies resulting in the birth of more than one neonate at a time are graded as