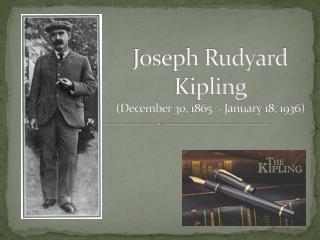 The Jungle Book - . rudyard kipling. characters. who is shere khan?. a lame tiger who wants to kill the man cub. who is

JOSEPH CORNELL working with fantasy From Scholastic Art, December 2000/January 2001 - . what type of figure is central

CATCH 22 JOSEPH HELLER - . a book review by neeraj sharma. the book. a book- a classic. one of the most influential book

How does Rudyard Kipling develop and contrast different characters’ points of view? - . in this lesson you will learn