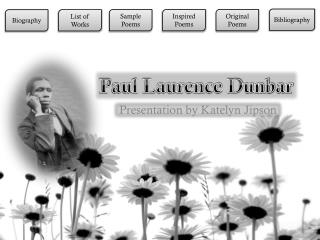 Sympathy Paul Laurence Dunbar - Presentation by: yana berezina. sympathy paul laurence dunbar. aim: how can we have a

We Wear the Mask Paul Laurence Dunbar - . we wear the mask that grins and lies, it hides our cheeks and shades our eyes,

The Haunted Oak by Paul Laurence Dunbar - . how vocabulary creates a creepy mood and atmosphere in this story of a

Sympathy by Paul Laurence Dunbar (extended metaphor) - . i know what the caged bird feels, alas! when the sun is bright

Dunbar High School - . every student on track at every stage of his/her high school career to graduate prepared for

The Poetry of PAUL LAWRENCE DUNBAR and EDWARD ARLINGTON ROBINSON

FATHER LAURENCE - . by mairi, olivia and cassidy. the i mportance of father laurence in the film