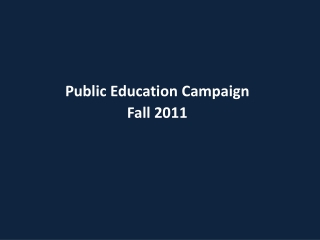 Public Education Campaign Fall 2011. Summary: Polling Research. “Global development” is seen as important, but many see the term through a commerce lens. There is strong interest in/support for global development, including many who say they’ve donated to the cause. Fall 2011 - . tpa introduction. what is tpa?. a teaching performance assessment is an assessment that requires candidates

Millage Education Campaign - . from failure to success in two years. about the rapid. regional governmental structure