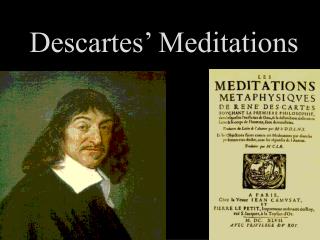 Descartes’ Meditations. Descartes’ First Meditation. Four bulldozers of doubt: I can’t trust my senses I could be crazy I could be dreaming A malicious demon could be out to fool me. Is there anything you’d stake your life on?. Is anything left standing?. Descartes’ Second Meditation. Rene Descartes, Pierre Fermat and Blaise Pascal - . descartes, fermat and pascal: a philosopher, an amateur and a

Philosophy of the New Age and Enlightenment - . general characteristics of the new age philosophy . f. bacon’s

Brief History of Modern Science - . discovery - a new method of acquiring knowledge was invented by a series of european

The Holy Rosary Novena With Scriptural Meditations The Sorrowful Mysteries Tuesdays and Fridays - . in the name of the

Epistemology and Faith and Reason - . maymester 2007 day 4. rationalism. the main option to empiricism is called